People who may have used CBD (or products infused with it) often become frantic if there’s a drug test on the horizon. One does not have to collapse under the weight of the fear that you will essentially fail a drug test. The explanation may very well be a little complex, but the answer is simple. It is a resounding NO. No here means you will not fail a drug test by taking CBD. Its relation to cannabis or THC does not automatically mean that a drug test will get you. Whatever the case, let us help you find the truth behind a positive drug test and a question like this: Does CBD show up on drug tests?

Why there may be a need to have a drug test?

This might be due to a variety of reasons. The first and foremost reason might be job-related. This is what initially scares people who may have used CBD (or any other chemical compound related to cannabis) before a drug test. What scares them is that they think their failure in a drug test will lead to expulsion from their job because of their CBD use. This is essentially overthinking as the first half of the last sentence is indeed right, but the second half is radically false. CBD cannot get you high, and the usual drug tests are rarely made to test for CBD inside your body. This statement forms the cusp of discussion in the next section.

Wondering if CBD gets you high? Click here to find out!

Another reason might be that there must be a need for a drug test for something medically related. It might be before pregnancy or some surgical procedure, which needs to have your body free of non-body fluids and chemical compounds. Well, there is no cause of concern here, even if you a non-frequent user of high-inducing cannabis extracts. The real fear related to a drug test necessity in this type of situation comes when you do not want your surrounding people to know about your usage (It is not a sin to use CBD!).

This could be someone like your doctor or your spouse. Again, even when it comes to this situation, CBD is not the culprit behind the failure of a drug test. If someone fails a drug test, it is probably something else. It is most probably THC, which is another chemical compound stemming from the cannabis plant. THC is also what forms the topic of discussion in the very next section. 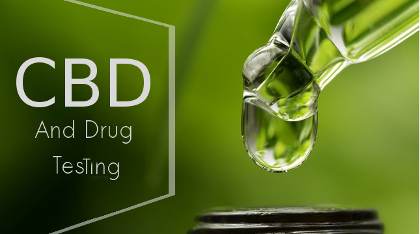 CBD and THC: What’s the deal with them and how they relate to drug tests?

Both of these belong to a family of cannabinoids (certain chemical compounds can interact with your body – more on this later) called Phytocannabinoids. The word Phytocannabinoids translates into plant-based cannabinoids. Most of the phytocannabinoids come from the cannabis plant, much like CBD and THC and as a result, many of these can be psychoactive. This is not the case with CBD, though. CBD is not psychoactive, even though it belongs to a plant that is known for producing a couple of “High” inducing chemical compounds and a species like marijuana. THC is one of these “High” producing chemical mixtures, and it can be present in many of cannabis’ popular species like marijuana.

All of this comes down to THC is psychoactive, which means it is the one that makes people feel a “high” whenever it’s taken in some form. CBD is the one that is sometimes blamed for the effects this one can produce. The reason behind this blame game is that sometimes both of these can be present in the same species of the cannabis plant. Moreover, it is highly likely if someone happens to fail a drug test then it is probable that the product they are using might be having both of the chemical compounds and the psychoactive one that led to the failure.

As for the question posed by the title: Does CBD show up on drug tests, the section below is what might drive you a better explanation about this situation.

The science behind CBD, THC, and Drug Tests:

Now, this type is made inside the body through the lipid found in neurons of the brain. This helps in providing support for ECS and other organs of the body and is used for regulation and modulating specific functions that are of importance to the body. By binding to the receptors in the ECS, THC can produce its mind-altering “High: effects.

Whenever one uses a product with a certain kind of chemical compound, it is usually absorbed through the bloodstream and travels from it. Before its travels to the whole body through the blood, it is broken down into much smaller pieces as part of the metabolism process, no matter what the intake method is. These smaller pieces, which enter the bloodstream, are called metabolites.

Most of the drug tests that are done, most of the time, look for the metabolites of THC. With this reasoning, one might say that if you are taking CBD, you have nothing to worry about. While this rings true, it can sometimes be a little more complicated than that. In the very next section, we precisely talk about that in more detail.

Causes of a positive drug test?

A couple of reasons related to situations where there is a positive drug test, and you think this might be due to CBD (which isn’t the case).

It could be that the CBD product you may be using might have THC. This can happen as there are a significant number of low-quality products whose extractions are not appropriately done or are not up to proper standards. The result is that THC tags along with CBD and therefore can be present in the product that you might be using. One can say this is what we called cross-contamination, and it is not done deliberately. This creates a possibility of the detection of tetrahydrocannabinol metabolites in the system of the user.

Low-quality CBD products can have THC more than the legally allowed amount, but the sellers can hide this fact leading to detection. They are hiding this and sell the products to customers without adding to their knowledge that the specific product may be having the psychoactive compound more than the legally allowed amount. This is the most common reasoning behind a positive drug test.

There can be an incident of mislabeling either by a deliberate measure or rather by accident. This makes the user prone to get positively identified with Tetrahydrocannabinol metabolites by a drug test. It is done with deliberation if and when the low-quality products are trying to hide the fact there is THC in them. Also, at times there can be mislabeling by accident.

Passive contamination or inhaling can also be a possible cause when it comes to THC detection in your body. While it is a rare thing to happen, it is certainly possible. It becomes plausible in an event like this: Heavy marijuana smokers surround you and you have been inhaling THC in large enough amounts, which leads to detection.

Additionally, there can be false positives when it comes to drug tests like any other medical test. There are many occasions that this type of thing has happened before. A recheck or retest can resolve the confusion.

Specific steps can be taken to avoid getting a positive drug test result. Passive exposure to marijuana usage should be avoided at all costs. This is especially true for individuals who have friends who are regular pot smokers. One should also research the CBD product one uses and owns. One should know the product is of high quality, and the seller can be trusted upon. This is done by checking if the company selling it is legitimate or not.

Moreover, the user should ensure the product of CBD one might be using is made from CBD isolate (the purest form of CBD). This ensures the product does not have any other cannabinoid in the mixture. Furthermore, one user should also ask questions regarding the production and extraction of CBD from the seller or maker of the CBD product. If a user tries to make sure all of these conditions are met, there are almost nil chances that the drug test turns out to be positive. This method leaves you with no worries about the answer to Does CBD shows up on drug tests.

What if some THC does come into the system then how long and where does it stay?

Metabolites can be found in a range of different places. These places are where it can usually be found after a chemical compound’s usage. Many of the drug tests are based on a range of different areas like this. One of the most common places where THC metabolites can be found and drug tested is Urine. Urine Testing is especially prevalent in the workplace environment. In the urine, THC metabolites must be around or more than 50 nanograms milliliters to trigger a positive result. These are detectable in urine for approximately 3 to 15 days after the use of the marijuana-like substance.

Blood testing is less common, especially in the workplace, but it is still essential to know this one’s statistics. In the blood plasma, THC is detectable for around 5 hours. If it turns into metabolites, then it is detectable for about three days. This type of testing is not the most optimal type of testing. This is due to the psychoactive compound that manages to vanish from the bloodstream rather quickly. It is detectable through blood with around five ng/ml. Saliva testing or oral swabs are also not conventional.

For this reason, the minimum amount of THC-related impairment is also not established. While chronic use through blood can have an extended time-frame, one-time usage gives the user a 72 hours window. THC metabolites can be identified in the hair inside the time-frame period of 90 days. Usually, the cutoff of this type of testing can be around one picogram per milliliter.

Why should heavy use of CBD also be avoided before a drug test?

There seems to be growing evidence that CBD can turn in THC when it is in the digestive tract. This is true because CBD has a way of turning into THC when it is in acidic environments, and the stomach is one of them. This is a critical point for a question like this: Does CBD show up on drug tests. While the evidence is growing, it is also at times contested. That does not mean that you should binge on CBD before a drug test, considering that some tests are even made to look for CBD metabolites.

The Federal Food, Drug, and Cosmetic Act require this disclaimer. We collected this information from various sources for the convenience of our customers. The Food and Drug Administration did not evaluate the statements regarding these products. FDA research did not confirm the efficacy of these products yet. These products are not to diagnose, treat, cure, or prevent any disease. The information we present here is not a substitute for information from health care practitioners. It is also not an alternative to information from health care practitioners. Before using any product, you should consult your doctor and ask about the risk of interactions or complications.

A BETTER WAY TO GOOD HEALTH

CBD
FOR ALL YOUR NEEDS!